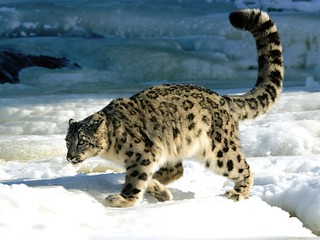 This is a snow leopard. These animals are going extinct. There are only about 4500 to 7500 alive right now. But, the good thing is, its fluffy. I know what you are thinking right now. I want to hug it. Yea. Me too. The snow leopard is known for their beautiful thick fur. It has a white, yellowish or soft gray coat with rings with black or brown. The snow leopards spots help it camouflage. This animal is going extinct. Another animal that is going extinct is the Amur leopard. These leopards have decreased in numbers because of poaching and habitat loss. There are roughly only about less than 60 Amur leopards alive today. It is pretty sad how much wildlife we have destroyed just to make more space for us.

This is a global issue that could eventually be prevented from happening anymore. Some things that people could do about this is they could start breeding more animals to increase their population. Also another thing that they can do is that people could start planting trees and creating habitats. This would increase the population of a lot of animals because some of the animals that have already gone extinct have gone extinct because of habitat loss.